Posted on September 28, 2012 by keithyorkcity

In the heart of Harlem, at the northwest corner of 128th Street and 5th Avenue, lies a tiny rectangular park. Like so many pocket parks in Manhattan, it’s a clean, quiet bit of respite from the hustle and bustle of city life. Affixed to the perimeter fence of the park is a NYC Parks Department sign declaring it “Collyer Brothers Park.” Most New Yorkers don’t pay any mind to the names of the parks they use on a daily basis. But in this instance, they really should. The Collyer brothers, and the lives they led, were bizarre beyond imagining. And they deserve to be remembered.

The Collyer house in 1947, as police use ladders to gain access.

Homer and Langley Collyer were born in 1881 and 1885, respectively, to Dr. Herman Livingston Collyer, a gynecologist at Bellevue Hospital, and Susie Gage Frost, a former opera singer. Not only was Dr. Collyer a first cousin to his wife Susie, but the two insisted that they could trace their family’s lineage back to a fictional ship, which they claimed landed in America a week after the Mayflower. In actual fact, they were descendants of the Livingston family, which while still an old and established New World line, didn’t immigrate to America until 1672 – more than half a century after the Mayflower.

Dr. Collyer was known to be eccentric. He’d often use a canoe to paddle himself from Manhattan to the City Hospital on Blackwell’s Island (now Roosevelt Island) where he sometimes worked. Neighbors would see him carrying the canoe through the city streets during his commute to and from the river. The brothers, as they aged, followed increasingly in their father’s odd footsteps. Both are said to have attended Columbia University (though Columbia denies any record of Langley ever having attended). Homer attained a degree in Admiralty Law, and Langley began to continuously tinker with household objects, fancying himself an inventor of sorts.

In 1919, for reasons unkown, Dr. Collyer abandoned his family. Records are unclear as to whether or not Susie followed him when he left, but either way, Homer and Langley were left on their own in the family mansion at 2078 5th Avenue. Dr. Collyer died in 1923, with Mrs. Collyer following suit in 1929. Upon their deaths, the brothers inherited all of their property and possessions and sealed themselves up in their house, away from the world. 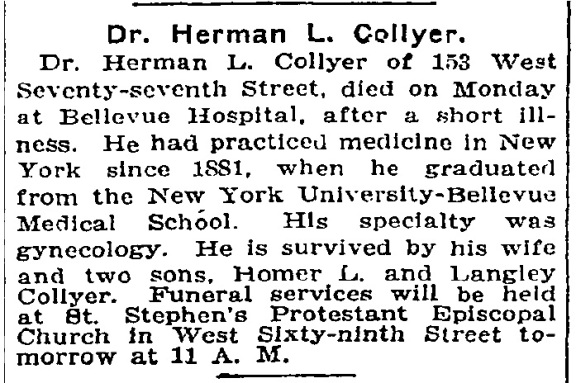 The obituary of Dr. Herman Collyer, from the NY Times 1923

Tales of their eccentricities continued to circulate, fueling rumors that the two maintained an extravagant lifestyle behind their closed doors, surrounded by riches and luxuries from Arabia and the Orient. In reality, the brothers were sliding into madness. They had their phone disconnected in 1917, claiming they had been billed for long-distance calls they didn’t make. And when their gas was turned off in 1928, they lived without heat or hot water, and used kerosene for cooking and lighting. When vandals used rocks to smash their windows, Langley simply boarded them up.

Langley began to wander the city at night, fetching water for the house at Mount Morris Park (now Marcus Garvey Park). He’d also wander far and wide for random minor groceries, sometimes as far as Williamsburg in Brooklyn just for a loaf of bread. He’d pick through garbage and collect food that was to be thrown out from grocers and butchers to bring home to his brother Homer, who by this point had been crippled by rheumatism. It was during these wanderings that Langley also began to drag home and accumulate thousands of objects and pieces of furniture which had aroused his interest.

When Homer lost his eyesight in 1933 due to hemorrhages behind his eyes, possibly caused by a stroke, Langley devised a home remedy: one hundred oranges per week, along with black bread and peanut butter. In 1942, the New York Herald Tribune interviewed Langley. In response to a query about the bundles of newspapers he kept in the house, he replied, “I am saving newspapers for Homer, so that when he regains his sight he can catch up on the news.”

Long a neighborhood oddity and source of gossip, the Collyer brothers avoided the wider spotlight until 1938, when the World-Telegram ran an article in which they interviewed realtor Maurice Gruber. In it, he claimed that the brothers wouldn’t respond to his offers to buy some of their real estate in Queens. World-Telegram reporter Helen Worden sensationalized the peculiar pair, referring to Langley as “the mystery man of Harlem,” and perpetuating the rumors that the brothers lived on piles of hoarded money that Langley feared to put into a bank. Worden cornered Langley one night as he went on one of his shopping walks:

“Good evening, Mr. Collyer. The neighbors tell me you keep a rowboat in the attic and a Model T in the basement.”

“Yes and no,” he replied. The boat, he explained, was his father’s canoe. “He used to carry it to the Harlem River on his head and paddle down to work every morning and back every evening. The auto was his, too.”

Another reporter quoted a neighbor describing Langley as “the ghosty man … He did have a brother, Homer, but nobody’s seen him in a long while. They ain’t seen his ma, either. She was s’pose to be dead, but she never had a funeral. … He’s like haunts in graveyards, he don’ come out before midnight.”

A quote from Langley Collyer in the NY Times, 1942

As interest in the bizarre brothers began to grow, Langley became increasingly frightened and paranoid. He began to arrange his ever-growing collection of junk in the house into a series of mazes, tunnels, and booby traps. In 1942, the Bowery Savings Bank attempted to evict the brothers from their home, as they had begun refusing to make their mortgage payments. The bank sent over a clean-up crew, but Langley ranted so loudly at them that neighbors called the police, who in turn tried to break down the house’s front door. They were unable to do so, however, due to a solid wall of junk blocking the way. Striking a deal with the bank, Langley wrote out a check for $6,700 (over $90,000 today), effectively paying off the mortgage, and retreated into his fortress, away from prying eyes once more.

On March 21, 1947, the NYPD received an anonymous call that there was a dead body in the Collyer house. Again, they tried to force open the front door, and finally removed it by its hinges. They found it blocked by stacks of boxes. The basement entrance was similarly blocked. After forcing open a first-floor window, they found the house completely filled with rat-infested piles and stacks of junk and trash. Around noon of that day, officers forced open a second-floor window, where they found Homer Collyer dead. Barely clothed, and with his hair wildly overgrown, Homer had eaten and drunk nothing for days before he died of a combination of causes, including gangrenous bedsores, bronchitis and emphysema.

One of many such rooms in the Collyer home.

As the house continued to be cleared, rumors swirled wildly regarding what had become of Langley. Some said they saw him boarding a train out of town. Others said they’d seen him in upstairs windows of the house, hiding from the crowds gathered below. The odors emanating from the house were described as a “punch from a mailed fist.” Cleaning crew members and police officers smoked cheap cigars, hoping the smoke would at least veil the pungent stench of decay and death.

Patrolman George Hughes makes a list of items being removed from the house. 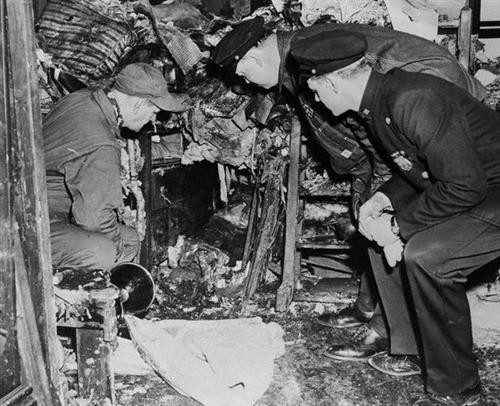 While climbing through one of his tunnels, it appears his clothing may have snagged on a trip wire, releasing one of his own booby traps. He had been crushed under a massive pile of paper and boxes. Dependent upon Langley for food and water, it is likely that Homer died several days after him. The stench overwhelming the house had been coming from Langley’s hidden body. Both brothers were buried with their parents at Cypress Hills Cemetery in Brooklyn.

To this day, NYPD and FDNY personnel refer to dangerously hoarded and cluttered buildings as “Collyer Mansions.” That, and a tiny park on 5th Avenue where their home used to be, is all that remain of two tragically bizarre men who only really ever wanted to be left alone.

Name: Keith Age: 20-something Location: New York Passion: History You'll find a million blogs like mine, but mine is better.
View all posts by keithyorkcity →
This entry was posted in Biography and tagged collyer brothers, collyer brothers park, harlem history, hoarders, homer and langley collyer. Bookmark the permalink.