Posted on October 7, 2012 by keithyorkcity

It can be said, with very little hesitation, that trains made America what it is today. The oft-maligned government-run Amtrak is a mere shadow of the great and powerful rail companies of the 19th and early 20th centuries which laid thousands upon thousands of miles of steel tracks all across this great country, binding cities and peoples together in ways never previously possible. 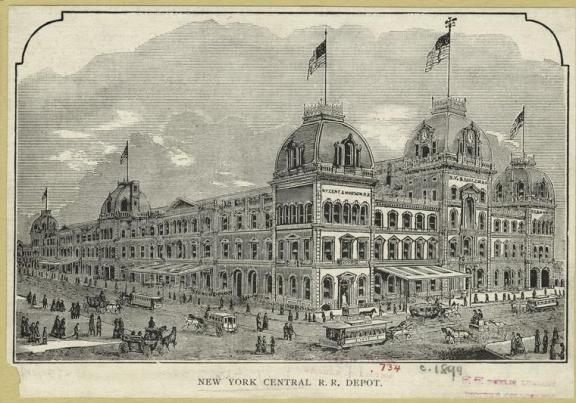 And great fortunes were able to be made by those with the resources and determination to build America’s rail infrastructure. In late 19th-century New York, the undisputed railroad king was Cornelius Vanderbilt and his New York Central Railroad. The Central ferried travelers and commuters from all across the northeastern United States directly to their immense train station at the heart of Midtown Manhattan at 42nd Street and Park Avenue.

The ferry to New Jersey at Cortlandt Street, 1899
(NYPL)

New York Central’s chief rival at the time was the Pennsylvania Railroad, based in Philadelphia. Blanketing much of the heartland of America, from St. Louis to Chicago to Pittsburgh to Baltimore, the Pennsylvania rail system was immense and, for many years, it was the largest publicly traded company in the world. But they lacked a direct connection to New York’s bustling market. Their rail lines terminated in Jersey City, New Jersey, and riders had to board ferries to cross the Hudson River to downtown Manhattan: a distinct inconvenience which put P.R.R. at a steep disadvantage in their jockey for New York market share. 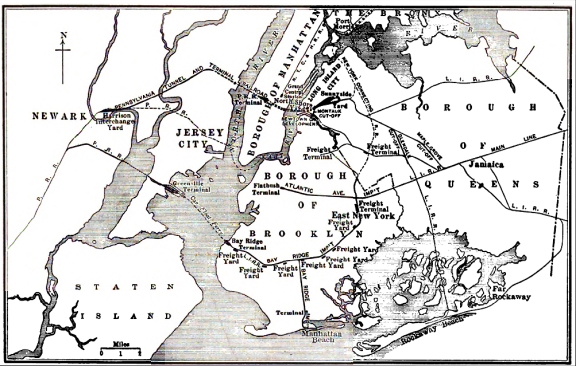 A 1912 map of the Pennsylvania RR linking its New Jersey and Long Island trains in the heart of Manhattan.
(copyright expired)

Knowing they’d need to take decisive action if they wanted to compete with New York Central, Pennsylvania Railroad set to work in 1902, planning an engineering feat of unfathomable scope and scale for the time: to build a set of tunnels beneath the Hudson River, bringing their customer-filled trains directly into Manhattan and solidifying themselves as a viable alternative to Vanderbilt’s enterprise.

The hole for Penn Station, 1908
(Library of Congress)

Digging commenced in 1904: west from Manhattan’s 11th Avenue and east from Weehawken, New Jersey. In September of 1906, the two tunnels met beneath the Hudson River, creating the longest underwater tunnel in the entire world at the time. Simultaneously, the rail company, which had recently acquired the Long Island Railroad system, constructed another series of tunnels under the East River. The number of rail lines, trains, and people who would be brought together at the central node of all this activity would be astronomical. The station built to welcome them would have to be worthy of such scale.

The 7th Avenue facade of Penn Station, 1911
(Library of Congress)

The Pennsylvania Railroad summoned the architectural firm of McKim Meade & White, whose illustrious resume included such city landmarks as Madison Square Garden, Columbia University, and the Morgan Library, to design their new rail depot on an 8-acre site at 7th Avenue and 33rd Street. They would surpass all expectations of grandeur and awe, creating a landmark on par with any the citizens of New York had ever seen.

Looking toward the main entrance, 1910
(Library of Congress)

The dimensions are hard to imagine, such are their scale: fronting 7th Avenue were dozens of columns 35 feet tall. Passing through the main entrance, which was modeled after Berlin’s Brandenburg Gate, riders’ found themselves ferried through an entrance hall 225 feet long and 45 feet wide, flanked by shops and cafes.

Past the entrance hall was the main waiting room, inspired in style by the Roman Baths at Caracalla, and built on a scale mimicking the nave of St. Peter’s Basilica at the Vatican, it was the largest public room in New York, and one of the largest in the world.

The boarding area, 1910
(Library of Congress)

Beyond the waiting room was the nerve center of Pennsylvania’s new showpiece: the sprawling, glass-and-iron-covered gallery holding the station’s dozens of trains, tracks, and platforms. The soaring canopy ceiling, the gleaming marble floors, the wrought-iron staircases, and the polished brass finishings made for an incredibly impressive welcome for any incoming passengers. 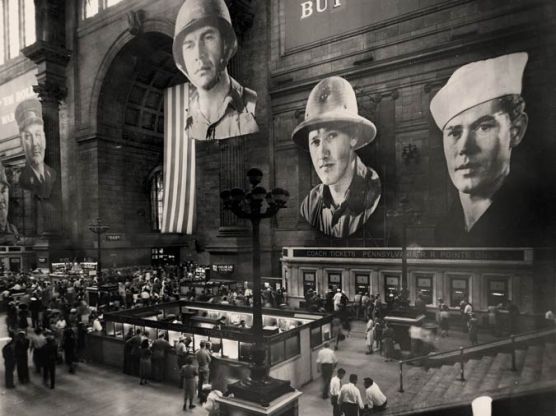 Hundreds of thousands of passengers marched in and out of Penn Station each day, with its usage peaking during World War II, when fuel rationing and the movement of soldiers combined to form a rail usage boom throughout the 1940s. In fact, more than 109 million passengers used the station in 1945 alone. But America’s victory in the war and ensuing success meant the shunning of rail travel and of their monolithic terminals. Ridership dropped steeply into the 1960s, and Pennsylvania became desperate to protect its interests in the face of seemingly insurmountable financial losses.

Penn Station in New York had seen its maintenance slide over the years, and it was beginning to show its age and wear. Its glass ceilings were blackened from decades of smoke. Its facade was dark and brooding, covered as it was by layers upon layers of pollution and grime. And with historical preservation still a notion in its infancy, the one-grand landmark began to be viewed as an eyesore and a liability.

And so it came to pass that, in the late 1950s, Pennsylvania Railroad sought to sell air rights above the station’s underground platforms. In 1962, the announcement was made that grand old Penn Station would come down, to be replaced by a starkly modern new Madison Square Garden and an accompanying office tower. Pennsylvania Railroad, in exchange, would receive a smaller, completely subterranean station at no cost.

Protesting to save Penn Station

News of the station’s demise was met with a mixture of emotions by city residents. Some saw the demolition as a godsend, as old Penn had become so underused and neglected. Why not replace it with something new and useful? Others, however, saw it as the selling of the city’s very soul, and protested to the bitter end.

The station coming down in pieces.
(Aaron Rose/MCNY)

But money would win the day, as it so often does. In October of 1963, the wrecking ball began swinging. The grand temple to rail’s glory days was a mere pile of rubble by 1966. Architects, historians, and city residents mourned.

The loss of Penn Station did, however, spark new vigor into the city’s emerging preservationist movement. When Grand Central Terminal was similarly put onto the chopping block in 1972, activists and city leaders rallied against the developers who wished to replace the landmark with yet another modern office block. The terminal received landmark status and is today a jewel in Midtown Manhattan’s crown. It cannot be said how many other pieces of New York’s architectural history could have met their end had the outrage at the destruction of old Penn not changed forever the way cities view their brick-and-mortar heritage.

Today, it is difficult to imagine what Pennsylvania Station looked like in its heyday. A few ghosts from its past poke through to the modern day: one original iron and brass staircase leading to the platforms remains underground. And the colossal granite eagles which once held court above Penn’s main entrances have been scattered far and wide. Two stand outside the current Penn Station, one stands outside Cooper Union across from Cooper Square, two are outside the Great Neck Merchant Marine Academy on Long Island, one is at the train station in Hicksville, Long Island, and 4 eagles wound up on the Market Street Bridge in downtown Philadelphia. 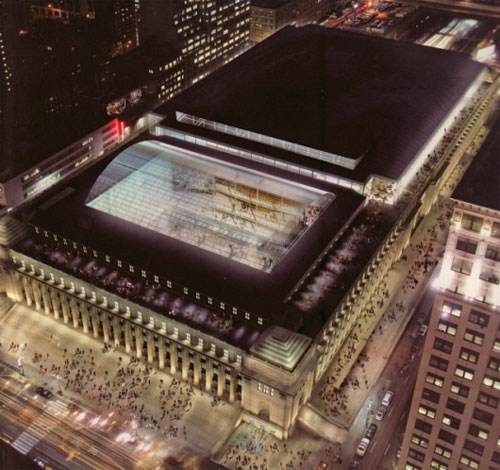 A rendering of the 1912 Farley Post Office after its conversion to the new Moynihan Station.

Perhaps the closest one can get to appreciating the beauty and scale of old Penn is to stand in front of the James A. Farley Post Office, which was completed in 1912 on 8th Avenue directly behind the station. Designed as the station was by McKim, Meade & White, the post office is destined to one day be transformed into the new Moynihan Station. It will be connected underground to Penn Station and handle all Amtrak train movements. Work has been repeatedly delayed, however, and it will likely be years before customers enter the building to do anything other than buy stamps.

Penn bedecked with a banner celebrating its replacements.
(Peter Moore)

Penn Station remains one of the (if not the) most painful losses New York has suffered architecturally over the past century. Its replacements, the “new” Penn Station, Madison Square Garden, and 1 Penn Plaza, seem insulting to the memory of the palace that once was. But its destruction paved the way for a revolutionary new approach to architectural preservation which might not have ever come to pass had Penn not fallen the way it did. 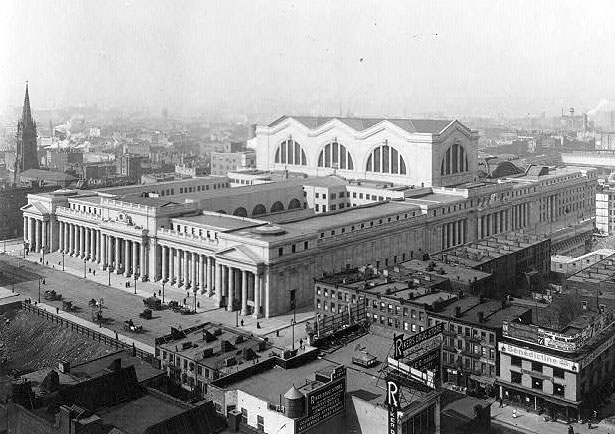 Gone are the days when train travel was a glamorous necessity, and a train station could instill pride in a city the way Medieval Cathedrals once did in Europe. But Penn will forever be remembered as an icon of an era. Its downfall will forever serve as a potent lesson: money cannot buy history.