New York in the years immediately following World War II was a city in tremendous flux. America was on the move and eager to modernize anything and everything at the drop of a hat. For reasons too complex and far-reaching to adequately unpack and analyse in a humble blog post, it had become a widely-accepted theory that the only way to “fix” a slum neighborhood (or a neighborhood perceived to be a slum by those in charge) was to level it and start from scratch.

Commerce! Art! Grass! All things grimy and old should be bulldozed to make way! The sprawling tenement blocks of the Lower East Side were flattened in favor of monolithic new low-rent apartment project towers. Run-down Radio Row south of Canal Street was replaced by the ultra-modern World Trade Center. And the African-American enclave just north of Columbus Circle known as San Juan Hill was wiped off of the map to serve as the very heart of New York’s emerging world-class arts community: Lincoln Center.

West Side Story being filmed on the streets of San Juan Hill just after the residents were evicted and just before the buildings were demolished, 1961.

A fortuitous convergence of ideas, needs, and desires led to the construction of the sprawling complex now known as Lincoln Center. Robert Moses, New York’s “master builder,” was at the forefront of the slum-clearing wave enveloping the city through much of the mid-20th centuy. He neglected public transit in favor of immense new highway systems, allowing the subway system to fall into a steep decline from which it wouldn’t climb until the 1990s.

A proposed highway cutting through downtown Manhattan to connect the Holland Tunnel to the Manhattan & Williamsburg Bridges. It was canceled in 1962.

The highways encouraged the spread of the city’s growing car culture, making it easier for middle- and upper-class residents to move further into the suburbs of Long Island, Westchester, and New Jersey while still working in Manhattan. And the lower classes left behind? He saw their plight as being a direct result of their environment. Providing them with gleaming new apartment towers surrounded by green lawns and trees and playgrounds should, in theory, solve everything. The idea was that the wide-open space and light would encourage the residents to better themselves and lift themselves up out of poverty.

Time would ultimately prove that, generally, these projects instead concentrated their misery, killing their local economies and livelihoods, and breeding successive generations of poverty-stricken citizens. But in the 1950s, that fact was not yet on anyone’s radar, and massive “renewal projects” sailed through approval hearings with barely an iota of attention paid to the thousands of protesting families from the affected neighborhoods. 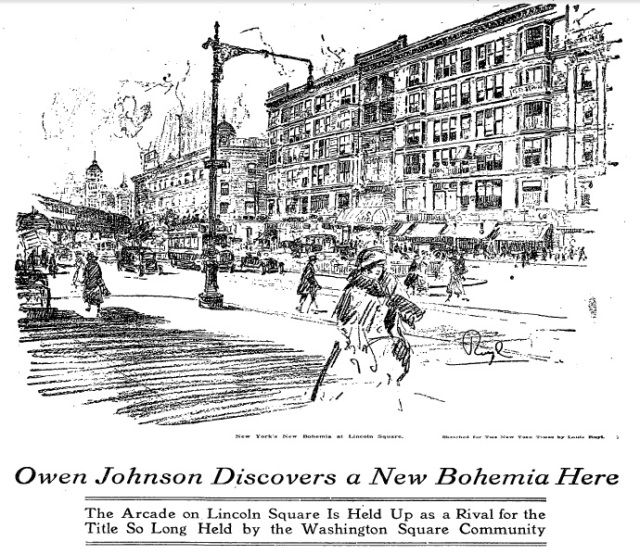 In 1955, Moses had his eye on the San Juan Hill neighborhood surrounding Lincoln Square just north of Columbus Circle. Originally a highly-regarded Dutch enclave known as Bloomingdale, the neighborhood had become a Bohemian artists’ colony by the 1910s. Soon, though, the artists moved on, and the neighborhood was left neglected. With its low rent and run-down buildings, it became a center for African-American culture, and was renamed San Juan Hill in honor of the large number of black soldiers who had fought alongside Teddy Roosevelt in that battle during the Spanish-American War. By 1940, the New York City Housing Authority had labeled San Juan Hill the “worst slum section in the city of New York.”

The old Metropolitan Opera House at Broadway and 39th Street. Built in 1883, it was demolished in 1967.

Knowing they were seeking a new home away from their aging hall at Broadway and 39th Street, Moses approached the Metropolitan Opera Company with a proposal: to have them move into his proposed new arts complex on the Upper West Side. It just so happened that, in 1954, the New York Philharmonic Orchestra had lost its lease at Carnegie Hall, as the venerable old venue was slated to be demolished in favor of a new office tower. The Orchestra had already been meeting privately on building a new venue jointly with the Opera Company. In short order, both organizations signed on to relocate to the new arts center. And the project forged ahead. Thousands of residents were forced out, hundreds of buildings were demolished, and 53 acres of San Juan Hill became a footnote to history.

By 1956, Fordham University had signed on to consolidate their scattered city buildings into one condensed campus on the south end of the development site. By 1960, the New York City Ballet and New York City Opera, both originated at City Center on 55th Street, had agreed to move as well. And in 1962, William Schuman, president of The Juilliard School of Music, was elected president of the new Lincoln Center. His ties would ultimately push the school to move its campus from Morningside Heights to the new center so as to be closer to the city’s premier artistic organizations. Lincoln Center, essentially overnight, had become the heart of New York’s art scene and, as such, one of the greatest arts venues in the world.

In early 1959, the architects Wallace K. Harrison (who had worked Rockefeller Center and the UN) and Max Abramovitz, along with several of their colleagues, had designed the Metropolitan Opera House, the Philharmonic Hall (now Avery Fisher Hall), and the ballet theater (now the Koch Theater) around a sprawling central plaza with a fountain. On May 14th of that year, an inaugural concert was held on the lot under a tent in front of more than 12,000 spectators. President Dwight D. Eisenhower turned the first shovelful of dirt, and to a roar of laughter, asked “If they can do this under a tent, why the Square?” 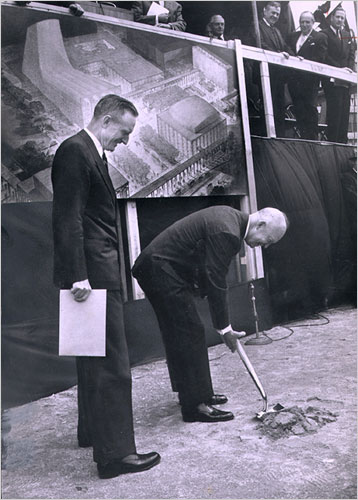 In September 1962, the Philharmonic Hall opened with a televised concert conducted by Leonard Bernstein. A passing woman, a former resident of San Juan Hill, lamented, “What are old people going to do with opera?” Lincoln Center remains one of the world’s most legendary arts venues. But it became so at the cost of the homes and lives of thousands of New York’s most vulnerable residents. And who remembers them today? 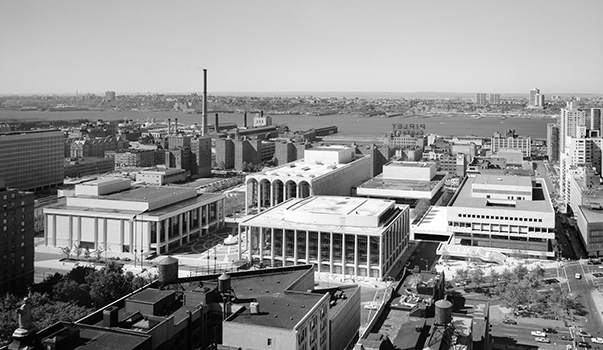 Lincoln Center in 1969, shortly after its completion. The Koch Ballet Theater is at left, Avery Fischer Hall to its right, the Opera House in the rear, Juilliard to the far right, and Fordham University to the far left. Tucked away in the background are the NYCHA towers built to house San Juan Hill’s displaced residents.

Then again, the city is always changing and fluxing, and will do so again some day. Before it was Lincoln Center, it was San Juan Hill, but before that, it was Lincoln Square, and before that it was the village of Blooming Dale, where English farmers and French aristocrats built country homes surrounded by ancient elm trees. They gazed out over the mighty Hudson River, and couldn’t possibly have imagined what lay in store for their little island home. The New York Times, analyzing the controversy over the slum renewal in the 1950s, summed it up nicely: